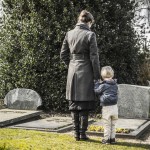 Psychotic disorders, such as schizophrenia, are often conceptualised as arising from a complex interplay of genetic and environmental influences (Tandon 2008). The impact of social influences on the risk of psychotic experience is undeniable. Recent reviews of this topic have called for a focus on maternal wellbeing as a means of primary prevention for mental disorder (Lewis 2014).

Much early neural development occurs during the time before birth however. During this time the child is likely sensitive to the mother’s health and wellbeing. How then do psychological stresses during pregnancy affect the child’s later development? Some studies have demonstrated an increased risk of conditions such as ADHD, Autism spectrum and mood disorders following maternal psychological stress during pregnancy (Khashan et al 2011, Class et al 2013). The findings of such studies have not been entirely consistent however and have not been able to assess influences such as the relationship of the bereaved to the deceased, or the manner of the deceased’s demise. This blog reports on a cohort study, which assesses the impact of early life or prenatal bereavement on risk of subsequent psychotic diagnosis

Abel and colleagues (2014) sought to explore the association between bereavement for mothers during pregnancy, or for children during early life and the subsequent risk of psychosis in later life. They also wanted to assess the impact of the death of nuclear (parents and siblings) versus extended (grandparents, aunts, uncles) family members. Finally they looked to understand whether the method of death (suicide, accidental or natural causes) was important to risk.

The authors used Swedish national registers relating to birth, deaths and hospital admission. Each Swedish citizen is assigned a unique identifying number that can be used to trace them through the varying databases, including healthcare related admissions. The use of Scandinavian population databases in epidemiological trials is well established. The comprehensive nature of these databases have provided a valuable resource for various research teams.

To ascertain the presence of psychotic disorder, inpatient admissions were identified associated with specific diagnostic codes (e.g ICD-10 F25 for schizophrenia). Identified cases were then divided into three groups for analysis:

Preconception and prenatal exposure to bereavement was classed as the death of the mother’s parents, a child or the biological father of her expected child. For the child (obviously following birth) an exposure could include the death of their mother.

To account for any possible delay between bereavement and onset of psychosis, those exposed between the age of 13 and 20 were excluded from the study.

Logistic regression was used in order to estimate crude and adjusted odds ratios (the chance of developing psychosis following bereavement vs no bereavement – then adjusting for identified confounders).

A second analysis was then performed assessing the type of bereavement – nuclear vs non-nuclear and any differences in impact. Finally for a subgroup (post-natal exposure) the impact from manner of death (suicide, accidental or natural causes) was also assessed.

The confounders assessed by the authors were comprehensive, addressing a wide range of factors known to be associated with the risk of mental disorder. Overall the methods used appear to be of high quality, suggesting that emergent findings should be reliable. Postnatal but not prenatal bereavement stress in mothers is associated with an increased risk of psychosis in offspring. Risks are especially high for affective psychosis after suicide in the nuclear family, an effect that is not explained by family psychiatric history. Future studies are needed to understand possible sources of risk and resilience so that structures can be put in place to support vulnerable children and their families.

The authors identified a clear increased risk of developing psychosis following bereavement during childhood. This risk appeared to be greater following the death of a nuclear family member, if the death occurred during earlier childhood and if the death followed suicide or accident. The authors’ finding that maternal exposure to bereavement during pregnancy was not associated with increased psychosis risk was inconsistent with previous studies that had found increased risk of mood disorders and developmental conditions such as autistic spectrum disorder and ADHD following psychological stress during pregnancy (Khashan et al 2011, Class et al 2013). The authors suggest this discrepancy may relate to differences in the nature of disorder between psychotic disorders and developmental or affective disorders. Of interest the study by Khasan and colleagues identified increased risk of affective disorders in boys only.

Bereavement, while always a tragedy, affects us all differently. For example the death of an elderly relative following a protracted illness will affect us in a different way to the death of a younger sibling. The manner in which we grieve following bereavement, and the impact of this on us is difficult to gauge through epidemiological studies alone.

The authors end by highlighting the complexity of the interactions between childhood development and bereavement stress. As always – more research to further elucidate these mechanisms is most definitely needed.