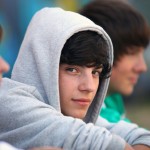 Depression in teenagers is a significant problem, with serious and potentially fatal consequences. Estimates of how many teenagers have depression at any one time vary between countries, but overall about 4-5% of mid to late teens worldwide are thought to experience clinical depression every year (Thapar et al, 2012).

Much of the current knowledge of why adolescents experience depression is extrapolated from adult research literature, and recommended treatments are similar to those offered to adults, including antidepressant drugs and cognitive behavioural and interpersonal therapies. Potentially triggering life circumstances are important for young people just as for adults, and although some stresses will be similar for adults and teenagers, e.g. family stress, bereavement, adverse life circumstances or events, others will be more child-specific, e.g. exam stress and bullying.

Previous research has suggested a particular association between concussion and depression in adults. Scientists at the University of Washington, Seattle, investigated whether a similar association is present in teenagers, and concluded that there is a higher rate of depression diagnosis in teens with a history of concussion as compared to adolescents with no reported concussions. The study used data from a previous telephone survey, which asked about depression, concussion and brain injury, amongst other things

The study used data from the US telephone-based National Survey of Children’s Health, 2007. In this survey, phone numbers were selected at random to be called up, and telephone interviews were carried out with those households where children were living.

Amongst the interview questions, parents and caregivers were asked if their child suffered diagnosed depression at the time of the phone interview. They were also asked about history of childhood concussion or other brain injury.

The authors, Chrisman and Richardson, used data from over 36,000 interviews, with a roughly 50:50 proportion of male and female children being discussed.

They used the statistical method of logistic regression to see if current depression and history of concussion were related in this sample. They controlled for other potential factors that might influence this association, namely: age, sex, parental mental health, and poverty level. As the authors point out, this study cannot be used to infer a causal relationship between concussion and depression. However, they do conclude that:

This is the first study to show a higher rate of depression diagnosis in a national sample of adolescents with concussion history. These data suggest clinicians should screen concussed youth for depression, so that they may effectively treat these individuals.

The authors are careful to acknowledge the limitations to their study in their discussion. They are very up front about the limits of having only retrospective parental report, which is subject to memory bias and potential under- or over-estimation of either concussion or depression. They also point out that they didn’t have information about when the diagnosis of depression was given to the child, so the depression could very well have preceded the concussion and been entirely unrelated. One potential influence which is less explicitly considered by the authors is the reason why someone might have childhood concussion, and the potential depressive effects of this. For example, if concussion has arisen from being hit by a family member or a bully, this may be indicative of a wider reaching difficulty, such as adverse family circumstances, chronic bullying or potentially even child abuse, all of which would be risk factors for depression in themselves. There was little information about how the concussions were obtained and this seems a very important gap.

A further gap in the knowledge, but one which is well-considered by the authors, is that if the link between concussion and depression is causal, the possible reasons for this are far from clear. The authors reflect on potential mechanisms, including the interesting possibility that sleep disturbance due to head injury might lead to biological changes which result in depression. Establishing causality and investigating biological explanations are interesting targets for future research.

Despite the caveats, it is impossible to ignore the evidence of this study given the very large sample size and three-fold increase in depression in those youths who had been concussed. No matter whether this is due to a confounding variable or to an as yet unclarified mechanism related to head injury, this association suggests clinicians could usefully keep depression in mind when assessing head injury, and vice versa, perhaps also taking extra care to screen for concussion in the histories of teenagers presenting with depression.

Dr Richard Corrigall, Consultant Child and Adolescent Psychiatrist, with many years experience of treating adolescents with severe depression, gave his opinion on the study:

It’s a fascinating study. I wasn’t previously aware of evidence of this link. The study seems important because of the size. The discussion is very good in that they carefully point out all the limitations, in particular that you can’t prove causality. They make a sound argument for careful screening in youths with traumatic brain injuries and further studies to explore the causal relationship. Future research could usefully examine whether concussion somehow causes depression, but also which other confounding variables might be at play. In particularly research could consider how the concussions came about, and whether certain groups of young adults may be more at risk of head injury. If the relationship is causal, biological mechanisms could be usefully explored, as to why a bang on the head should result in depression potentially years later.

See the Young Minds website for information on depression in children and teenagers.